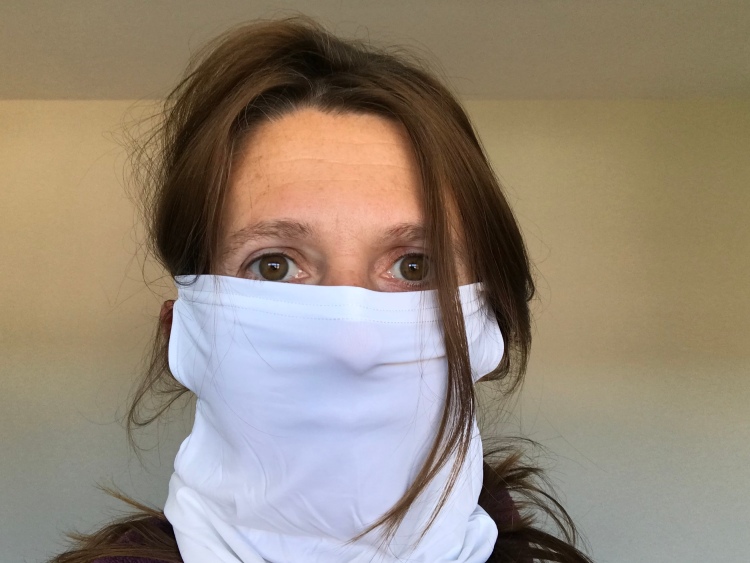 A few days ago, I put on a face mask for the first time. Although much of the rest of the world has been wearing them for weeks (and much longer than that in the case of some nations), here in the UK the habit has been slow to catch on.

The official advice has been against the use of face masks by members of the general public until relatively recently. Furthermore, there’s a certain cultural antipathy towards being seen to be making a fuss that perhaps makes Brits more reluctant than people in some other countries to adopt so conspicuous a measure. Although it has not been uncommon to see people wearing fabric over their mouths and noses in the last two months, the vast majority of those I encounter in and around my home town of Folkestone continue to go about bare faced.

When I’m outside, I’m the same. Careful to keep my distance and avoid busy places, I feel that a face mask is unlikely to add any significant further protection against the spread of Covid-19.

However, last week the government guidelines changed to state that people should aim to wear face coverings on public transport and in other situations where they might be unable to maintain 2m distance.

As a result, knowing that social distancing is impossible in the narrow aisles of my local convenience store, I took a face mask with me when I popped there to pick up some necessities a few days ago.

I felt rather self-conscious as I pulled up the snood at the entrance to the shop. As I predicted, I was the only one in the place wearing anything like it.

I was wrong, however, to imagine that this might trigger the resentment I have experienced and witnessed occasionally for trying to adhere to social-distancing rules. None of the five or six other shoppers expressed any disapproval at my decision to wear a face covering. Everyone went about their business quietly and considerately, doing their best to give one another space. After my initial awkwardness subsided, I even began to be thankful for the role the mask seemed to be playing in reminding me and others about the need to be careful (an interesting counter to the argument some commentators have advanced that masks might make wearers complacent about observing social distancing).

In fact, the most challenging thing was the limit the face mask placed on my ability to communicate. Used to smiling when I encounter people, I found myself hampered and cut off from those around me because of the fabric over my mouth. My usual facial signals were unreadable through the mask and so, instead of the general good-humoured glances I’m used to sharing in such situations, I found myself met with a procession of blank stares. (Although these may have been caused at least partly by the slightly mad effect pulling up the snood had on my hair!)

The experience was so odd that, in place of a smile, I found myself making a weak joke about having no plans to rob the shop when I got to the counter. ‘It’s all right, love,’ the cashier assured me wearily from behind her Perspex screen.

I came away feeling mildly embarrassed, as though by wearing the mask I had committed some minor faux-pas. Still, I resolved that I would continue to make use of them in similar situations: although it was awkward to feel that I might be making a spectacle of myself and unpleasant to be unable to interact as I normally would, the mounting evidence to show the role such coverings can play in limiting virus transmission at close range surely makes them worth a cringe or two.

I'm a UK-based author, editor and Royal Literary Fund fellow. My first book, 'Reading the World' (UK title) or 'The World Between Two Covers' (as it's known in the US), was inspired by my 2012 journey through a book from every country, which I recorded on ayearofreadingtheworld.com. My next two books are novels, 'Beside Myself' (Bloomsbury, 2016) and 'Crossing Over' (Audible, 2019). View more posts

6 thoughts on “First outing with a face mask”